Today I had the opportunity to bring my HTC Vive into work with the new gaming rig.

There are great number of educational resources in the Steam store including InCell VR and InMind VR (for use in Science and Biology classes), and Tiltbrush for use in an art class.

The HTC Vive Minimum Specs are as follows (DOES NOT WORK ON MAC): 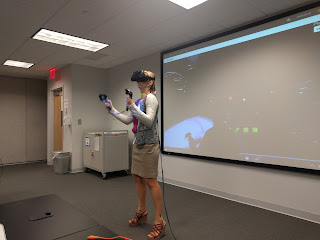 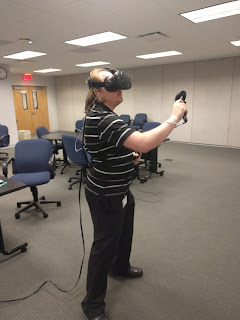 If you are using and HTC Vive in the classroom you may want to use these covers to prevent the transmission of germs.

Using VR in classrooms, schools and makerspaces can be a great tool for both educational purposes, active learning and release of stress and anxiety.  HTC Vive just released that Lifeliqe will be the new platform for educational VR content. "The experiences ranged from examining the Hubble telescope (in space) to interacting with dinosaurs to viewing the body of a shark from the inside out while deep in the ocean." HTC selects Lifeliqe as educational VR content partner 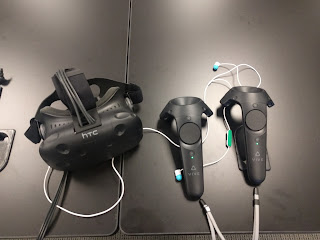 If the HTC Vive is too expensive for you, then take a look at the Google Cardboard  and some of the Curricular applications that can be integrated here.

As VR continues to grow and become more main stream, we will see products like Opto (a more expensive version of Google Cardboard WITH sound), Google Daydream a platform for mobile VR, and teachers seeing methods that this can be used in the classroom.

In a recent study by Samsung of over 1,100 teachers, "more than 9 in 10 teachers (93 percent) said they believe the use of VR would "excite" their students, and 8 in 10 (83 percent) say it might improve learning outcomes." The Possibilities for VR to Transport Students Appeal to Teachers

Overall, this is the year of VR and there are great possibilities that are coming down the pike regarding HTC Vive, Samsung VR, Oculus and Google Cardboard.  The possibilities are endless!
Posted by Unknown