Over the past few days I have had more time to delve into the world of VR and utilize my Leap Motion.  A Leap Motion is a gesture and motion tracker that will follow the motions of your hands to remove the need for a mouse.  Leap Motion for the past 6 weeks has been running a 3D Jam 2.0 for developers to create their own software, apps and programs that would work and integrate with Oculus Rift (predominately) as well as other open source projects (such as Google Cardboard).

Unlike Oculus Rift, Google Cardboard, does not come with it's own graphical interface card and therefore cannot run its own programs directly from the device, therefore we need an engine that can run the program from the computer to our cell phone: Trinus.  Trinus (as stated from their website):

Trinus VR (previously known as Trinus Gyre) was created to provide PC gamers with a high-end virtual reality headset without needing to buy expensive hardware, because you already have the hardware in your pocket. Trinus VR uses the display and sensors of your own phone to transform it into a portal to your PC games. Live your PC games in virtual reality today.

I have been able to sail a ship in Wurm through Trinius and Google Cardboard, roll a ball through a labyrinth and Trinius and my HooToo (This was more difficult with the Leap Motion controls) 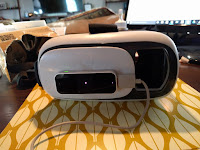 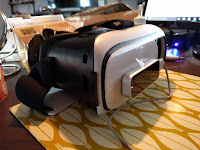 I have not spent enough time working with the Trinius software, but I was unable to integrate the head tracking into my programs.  Head tracking can run through Trinius in programs that have 360 degree rotation.

For the free version of Trinius, you are limited to 10 minutes at a time.  For more time, the app costs $9.99.
Posted by Unknown